As fishers we need to pay close attention to the signs we see, because they can provide vital information as to where and how we should fish. 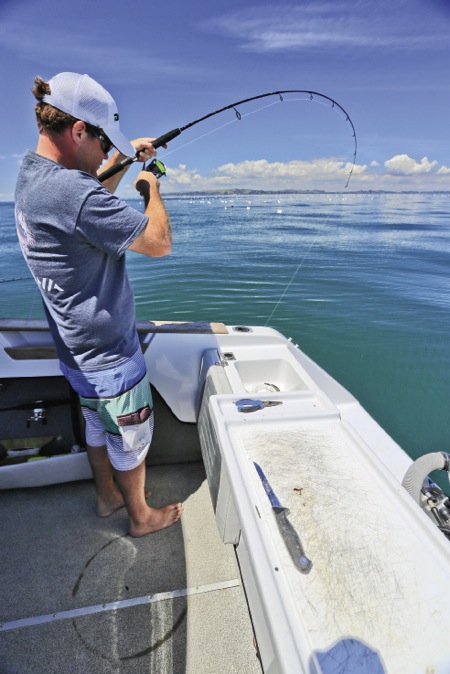 Chasing and fishing work-ups can be a very entertaining and productive strategy for thinking anglers. Some of the best signs indicating good work-up action are provided via sea birds; by being able to read and understand the subtleties of their actions, it’s possible to gain heaps of information about what is going on in an area.

However, to do this well, it’s important to know what species the birds are. While you don’t have to be an out-and-out bird watcher, you do need to know the difference between a seagull and a tern. All birds behave in different ways and can indicate what the baitfish being preyed on are, as well as the predators feeding on them.

While it would be impossible to describe the body language and sounds of every species of seabird, as these can be very subtle and varied, one of the best birds to study is the majestic gannet. These large birds are great at finding fish and have some very distinct signatures that can tell you what they’re up to.

High-flying circling over a small area generally indicates the birds are over schooling baitfish and are waiting for predators to push them up to the surface. If you see this type of action, head over, as something is likely to happen.

Bunches of low-flying gannets racing off in one direction usually indicate that some action is going on nearby, so it’s usually worth chasing them, too.

A heap of gannets sitting on the water cleaning and preening, is probably a post work-up act. The action on the surface may be over, but deeper down it can still be all on!

Small groups of gannets flying high in various directions are probably doing the same as you: they’re looking for the action.

Gannets flying at mid-height in one direction, especially if holding seaweed or similar in their beaks, are most likely heading home to roost.

Gannets dive-bombing a good workup will act in different ways depending on where the baitfish are holding and what species they are. Look at the angle of the dive: a shallow dive by single or small numbers of gannets may indicate piper or saury, whereas steeper dives in very concentrated areas can mean pilchards or anchovies being balled up deeper down by predators. In situations like this, you need to get close to the action. Once the birds have shown you where the action is, the boat is positioned to take advantage of it – I can’t stress enough how critical this can be. I have seen large work-ups where there are birds everywhere, but there is nearly always a definite ‘eye’, where the feeding action is hottest.

These work-ups are normally caused by pelagic-type predators such as kahawai, kingfish or tuna; positioning the boat so the anglers can cast into the eye without disturbing the action too much (or catching the birds present) can make the difference between strikes and no strikes. In every case, try and use the wind or current to your advantage, so that you drift towards the work-up, not away from it.

In other work-ups, where there is a variety of predators – kahawai, snapper and kingfish, say – it is important to use a decent fish-finder, as this will indicate where the different species may be holding in relation to the surface action. 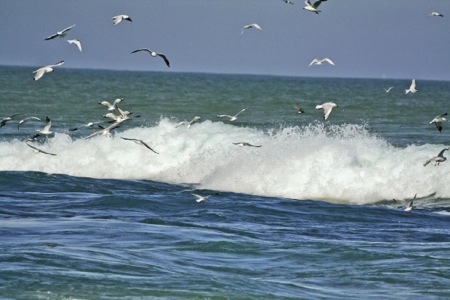 A story that emphasises this point happened while fishing with a group of mates recently. We hit a brilliant work-up in 25 metres of water, and the sounder blacked out at five metres below us. I told the crew that the marks looked like snapper, but they scoffed at me – until they literally could not get their lures down before being hit by striking fish. And guess what they were – snapper, between 4 and 9kg – all of them!

In many work-ups, snapper end up high in the water column while it is in full swing, before descending again to feed close to the bottom on the scraps drifting down after the work-up is over. Your sounder is worth its weight in gold when looking for the latter situation, as these feeding fish can be far away from where the main action occurred. 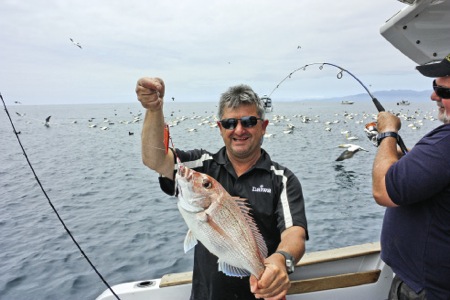 While we used gannets as perhaps the best example of how birds and their actions can help you find fish, don’t overlook other birds.

For example, the little black-headed tern, often referred to as the ‘kahawai bird’, is great for finding feeding kahawai, sometimes with snapper or kingfish accompanying them. And while the wide variety of petrels and shearwaters are often overlooked, they can quite often be found over schools of kingfish or feeding marlin. Even seagulls will feed on schooling baitfish at times, although at others they are fighting over someone’s lunch leftovers – you just need to be able to interpret the signs. 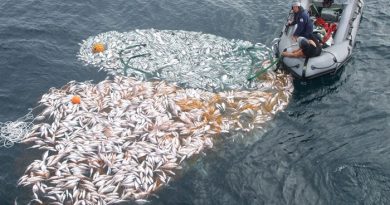 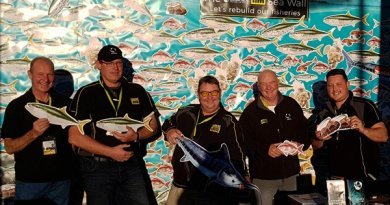 LegaSea at Fieldays with ITM – Come meet the team