Property values in NZ further moderated in June with the annual rate of change decreasing from 2.3% at the end of May to 2.0% at the end of June, according to the CoreLogic QV House Price Index.

According to CoreLogic NZ head of research Nick Goodall, performance was mixed across the main 12 provincial centres* and contributed to the minor drop, with half seeing a decrease in the annual rate of change and the other half holding firm or increasing. 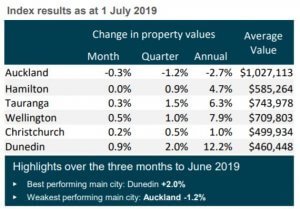 The annual growth rate for Hamilton also saw a minor drop from the previous month (4.9% to 4.7%), however the other four main centres’ rates of growth increased.

Dunedin continued as the outright leader with a 12.2% increase over the past year while the rate of growth around the wider Wellington area remains strong at 7.9%. The high rate of capital gain across Wellington can be attributed to larger increases in both Hutt City (11.3% p.a.) and Upper Hutt (15.0% p.a.), while value growth in Wellington City (6.0% p.a.) and Porirua (6.8% p.a.) has lost some momentum. 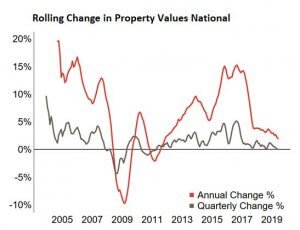 Outside the main centres, localised factors are having a clear impact on housing market conditions.

Nick Goodall said, “Unaffordability, and the near-elimination of foreign buyers across the country has had a significant impact in the Queenstown Lakes District with the annual change in property values now in the negatives (albeit only marginally at -0.1%) for the first time since July 2011 in the wake of the Global Financial Crisis which impacted property values across the country”.

“This will likely have a muted impact on recent home buyers, due to deposit requirements guarding against a negative equity situation, however it’s the potential impact longer term which will have owners nervous.”

Similarly, values in Auckland City Central, where we also know foreign buyers were most active, are continuing to track backwards at a significant rate of -3.7% over the last three months, to take the annual rate of change down to -4.7%.

Nick Goodall said “We seem to be at somewhat of a crossroads in the market as we see a split in performance between different localities. The nationwide market influences, such as low interest rates, low unemployment and strong population growth are reducing in their impact as we see it’s certainly not a case of one trend to rule them all. It is now that the strength of each centre’s local economy starts to dictate future housing prospects.”

“With any market cycle, it’s also important for owners and would-be-buyers alike to understand the different statistics available to them to evaluate the market accordingly. Median sales prices for example can be volatile, even year-to-year for some of the smaller centres. The latest headline regarded Gisborne values increasing by 54.4% over the past year. The reality is this captured a change in composition of what happened to sell between two periods over the year.” 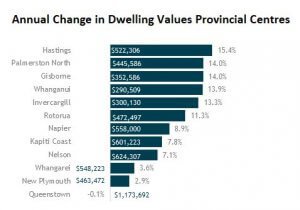 According to the CoreLogic QV House Price Index, which measures the change in value of all property in a given area, the increase in values in Gisborne over the year to the end of June 2019 was 14.0%. This is still a strong increase relative to our other regional centres and reflects both the lower value of property in the district as well as a competitive market among both owner occupiers and investors. Most recently ‘movers’ have increased their share of property purchases here, and although the majority of these are locals upgrading or downsizing, there has been a greater presence from outside of the region so far in 2019, especially from Hawke’s Bay and Bay of Plenty.

The latest ASB Regional Economic Scoreboard showed Gisborne as the “big mover in Q1” and it is expected that “the good times are likely to roll on over the remainder of the year”. Forestry and Agriculture are two of the biggest industries here which will have boosted employment and supported housing demand.

Elsewhere, Nelson’s somewhat ‘slow but steady’ market persists, despite a drop in the annual rate of growth (8.3% to 7.1%). A higher average value ($624,307), relative to other regional centres, has meant the increase in property values through the most recent growth phase was not as strong as other similarly sized areas. Anecdotally the rental market is very tight here and with persistently low listings volumes there remains consistent upwards price pressure for those properties that are for sale.

In summarising the current market and outlook, Goodall added: “We continue to watch both the Government and Reserve Bank with interest as their influence on the market is clear for all to see and they have the levers to pull. The Reserve Bank continue to reinforce the importance of financial stability with ongoing consultation on increased capital requirements but also state they could ease the current loan-to-value ratio (LVR) restrictions if ‘risks decline’.

From a Government perspective, the recent change of Housing Minister brings further interest and focus to the imminent ‘KiwiBuild reset’ which will likely become more of a ‘Government Build reset’, incorporating both Housing NZ and HLC (formerly Hobsonville Land Company) in new Government targets.”

“Outside their (Government and RBNZ) influence, our forecast is for the quieter market, and muted price growth around many parts of the country to continue, but we’re not expecting a material reduction in volumes or values across the board.”

“Interest rates remain low (with a strong prospect of the cash rate dropping again in August), migration is holding up well (if not increasing again) and unemployment remains low. These factors should ensure a solid footing underneath the market. But not enough to stimulate a rebound in capital gains due to tighter lending criteria restricting the pool of buyers.”

“After a significant growth phase for the property market across the country, questions now arise as to what’s next. Often it will fall back to the local economies to sustain growth, tied in with affordability. This is evident right now at both ends of the market, with Queenstown and Central Auckland negatively impacted by the foreign buyer ban and New Plymouth also with a weaker outlook, due to the Government’s decision to ban any new off-shore drilling permits in the oil and gas industry. The stronger markets of Wellington, backed by increased Government spending in the Capital and Dunedin, helped by the building of the new $1.4b hospital look likely to remain.” 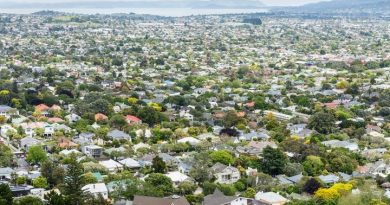 FOMO, messy markets, and the future 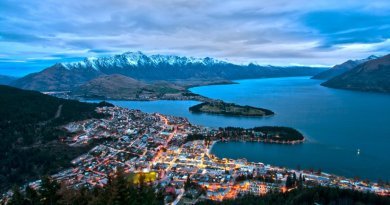